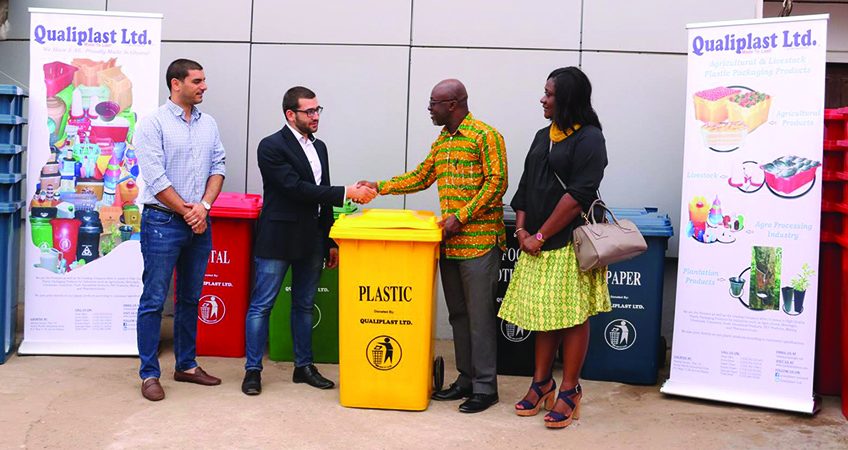 The Managing Director of Qualiplast Limited, Mr Fares Akl, has called on stakeholders in the waste management sector to promote the segregation of waste materials in the country.

He said the segregation of waste would facilitate recycling to reduce filth and help in the realisation of the President’s vision of making Accra the cleanest city on the continent.

Mr Akl made the call when Qualiplast presented 100 colour-coded bins to the Accra Metropolitan Assembly (AMA) for onward presentation to schools in the metropolis.

Mr Akl indicated that the company planned to partner the AMA to educate people, especially students, on the use of the coded bins and waste segregation.

“We have met various waste management associations to bring them on board to promote this campaign and we are urging the government to take this whole idea of segregation into consideration because we believe it will go a long way to facilitate the recycling of waste materials in the country,” he said.

Handing over the items, the Deputy General Manager of Qualiplast, Mr Joseph Akl, said it was the hope of the company that the donation would help reduce waste in the capital.

He also explained that segregating waste from source provided environmental and economic benefits, as it helped in creating a healthy environment and facilitated the re-use of the waste through recycling.

He assured consumers that the company would continue to bring out quality products through innovation for sustainable economic development.

Receiving the donation on behalf of the AMA, the Chief Resilience and Sustenance Advisor, Mr Desmond Appiah, said there had been a lot of challenges in dealing with waste segregation in the city but noted that with continuous collaboration, it could be overcome.

He said the AMA’s vision was to ensure that “we move away from landfill to recycling and then use the waste generated resourcefully for productive ventures”.

He commended Qualiplast for investing in a waste management project.